Mirror, Mirror on the Wall, Who’s the Fairest One of All? 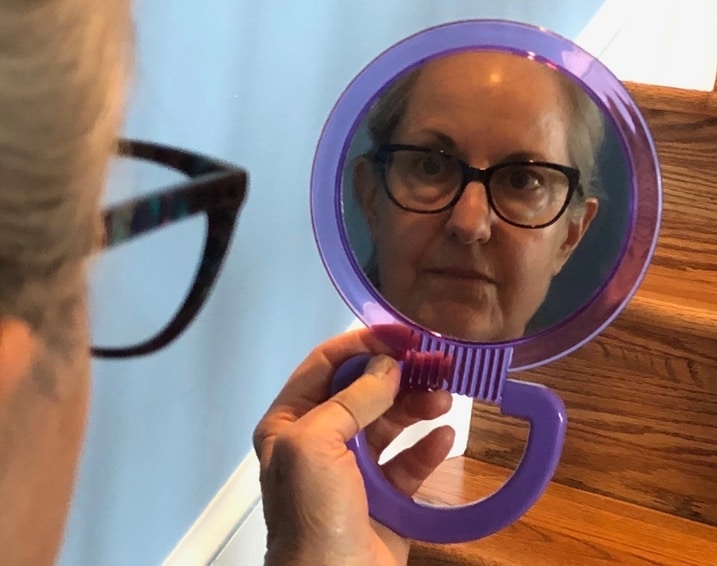 Mirrors have haunted me much of my life. Whether I was looking in one to help me do a thorough job of flossing teeth, to apply a little lipstick or mascara, or to do a quick head-to-toe check before going out, they’ve often felt like a source of humongous self-criticism. The one looking in the mirror (me???) could always find SOMETHING wrong with the image in the mirror (also me???) — crooked teeth, deepening crow’s feet, thick thighs, ever-expanding calves; an endless list of flaws!!! Same thing goes for snapshots, profile pictures, video snippets, etc. The eye that was scanning these images was ALWAYS a CRITICAL eye and the conclusions that resulted were that the gal in the mirror just didn’t measure up. To whom? Or to what? To some standard of measure I’d internalized. Anyway, it felt soooo crappy.

And I know I’m not alone in this. I’ve had many friends either cringe or turn their heads when a photo of them is displayed and some have told me that it brings them to tears to look at themselves in snapshots. It’s sad to think that so many of us, and not just women, are caught in this condemnation of these bodies that carry us so loyally through life. It’s crazy to expect that all these bodies could conform to a narrow range of shapes and sizes — those advertised in magazines, fitness ads, fashion runways, and clothing stores.

I can see where some of my scathing criticism of my body may have originated:

It has been helpful to see these influences. At first, seeing them pissed me off and resentment bubbled over—resentful of being immersed in such narrow-minded viewpoints as a youngster.  Over time, sitting with the resentment and anger toward all those who unwittingly helped me absorb this body hatred, I began to see that they, too, had been duped. They, too, were simply trying to live up to some standard of what was “acceptable” in the realm of physical appearance.

Seeing this, another example of the unconscious passing of the baton of unquestioned mindsets, I realized I wanted to drop the baton. How could I accomplish that? How could I begin to put a crack in this body-hatred habit?

I decided that one approach was to meet myself where I was — right here and now — still full of self-loathing and with an eye that critiqued every square inch of my physique. I started by meeting myself in the mirror – one of the most common battlegrounds. So, I began to watch really closely what happened whenever I was in front of a mirror. At first it was just plain uncomfortable. I’d want to turn away quickly so that I didn’t have to feel the repulsion in my body or hear the phrases that raced through my head about how subpar my features were, why couldn’t I take better care of myself, how could I ever go out in public in anything less than a huge tent dress, etc.

This continued for a while, but my ability to hold the gaze of the one in the mirror improved; we spent more time looking at one another. Sometimes tears trickled down my cheeks (and her cheeks). At other times we just gazed, meeting eye to eye and there was little commentary. That was different!

Then, one day, I had a feeling that someone else was there with me and my reflection. I couldn’t exactly see this being, but vaguely felt their presence. After a bit, a quick glimpse of this “person” flashed through my awareness. It was as if I had seen a fleeting image of the “perfect me”—sort of a composite body shape of many different women (friends, strangers and celebrities) who, in my estimation, had some or all the elements of the “perfect” body.

Wow. I realized that this imagined “perfect me” had always been there beside me in the mirror whenever I felt self-criticism OR self-praise. I had overlooked her all these years because my attention always zoomed in on my reflection, not on that vague image that was my standard of comparison off to the right.

In those less common moments when I could simply meet my reflection without judgement, “she” was absent from the reflection.

Only when I was divided in my opinion of myself—split between my own reflection and the faint, faint reflection of what I thought I SHOULD look like—was she there. When the SHOULD and the SHOULDN’T held no sway over me, she was absent from the mirror. When I was seeing the shapes and colors reflected in the mirror from a neutral vantage, there was no “other” off to the right.

It’s these internalized yardsticks, these adopted lists of what’s acceptable and unacceptable, that I’ve carried around unconsciously for so long. Since my unconscious often communicates with me in images – often fleeting images – rather than just in spoken or visualized words, it has taken a while to become adept at catching glimpses of these faint, short-lived pictures.

Furthermore, once I was more able to capture these ghost images, I also began to trust that they might be active communications from my unconscious, rather than discounting them as random images. So, I began to check whether a fleeting image that arose in my awareness seemed to trigger a reaction in my body. If yes, then I’d explore this image a bit more to see what it was trying to convey to me.  If there was no bodily response, then I took that to mean I had not unconsciously assigned any significance to the faint image.

This deepened my ability to “hear” what my unconscious was saying to me. It took me further into the realm of symbols and visual imagery instead of purely relying on words. It has been an amazing realm to explore.

As I continued to explore this, another thing happened. I developed a curiosity about the composite perfect me and all those women I’d unconsciously used to create her. I wondered about all those women and what I knew about them and what their lives were like, based upon what they had shared with me or what I’d read about them. Rather than finding that each of them was thoroughly at peace with themselves and free of suffering, I could see that they too struggled with self-criticism and felt the pull of self-improvement. What a hoot! I was unconsciously striving to attain what I thought was perfection (i.e. having a shape like these women) and those I thought were perfect were on the same, insane path as I was, simply a few steps ahead of me!!!

Realizing this about all these women has had a normalizing effect on me. It has begun to soften my relationship to the “me” in the mirror and the me who’s looking in the mirror. When we stand and gaze at one another these days, sometimes criticism is present, sometimes it’s not. What’s different is that now there is an awareness of the exchange between the two me’s—an overarching observation of more of what’s going on during each encounter.

And the recognition of this composite me who comes and goes from the mirror is a wonderful reminder of ALL the ways I still become caught up in comparison in my life. It has lead me to watch more for the subliminal images of other people who I’ve used as my yardsticks in other areas of life. It’s so nice to pull all this out of the closet so that I can more clearly see it!