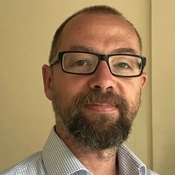 Hi. My name is Luke.

Life can be strange sometimes. You imagine it to be one way then whoosh, the rug is pulled and you are plunged into…what? The unknown perhaps? The shock of a cherished belief being torn asunder can cut to the bone.  Why? It seems at times a belief’s survival is tied to our very own, to its truth validating our own.  It’s relative of course. Your truth can be different from my truth, but that’s the rub.  It’s my relative truth we are talking about.  Even if we talk about your truth, it’s generally seen from my perspective.

How does this relate to the Living inquiries, I hear you ask? Well a funny thing happened to me one day.

I lost something.  Hope.

And with the loss of hope, the despair (which had always been there) flooded into the rest of my experience.  It took up my entire view until this was all I knew.  I searched everywhere for some relief, resisted it at every turn until I became so utterly exhausted by it, so consumed by it that my mind stopped. I could think no more, or more accurately what stopped was the repetitive and endless story that played through the mind like a broken record.  I could still function to a degree, but more like a zombie going through the motions or as an uneasy bystander to all that passed.  Then by some grace I ended up staying for a time as a server at a vipassana meditation center.  It suited me perfectly. I spent my days in mindlessness, not needing or wanting to talk or interact with anyone, shuffling from one prescribed activity to the next.  This went on for over a month until restless one day, I decided to visit a friend outside of the center. I sat on the couch across from him, (not saying much, mostly just listening) absently strumming a guitar that I had picked up equally as absently.

Out of the blue something (seemingly) happened that would fundamentally (also seemingly) change everything forever more.  In a moment (and possibly for an eternity) everything that was… ceased to be. I have no memory of the experience, in fact it was like falling asleep or fainting. Upon return I was in shock, or awe perhaps, it’s hard to say. I almost forgot that something had happened, until I looked down at the guitar. Plucking a note I became the sound (this is the only way I can describe it?!) I plucked another and became the finger that plucked, the string that vibrated and the air within the guitar, all in quick succession. I returned again, dumbfounded.  It was raining outside at the time and I knew I could be and was indeed everything that was, as well as none of it at all.  I mumbled something to my friend about needing to leave and walked away in a daze. There were many more insights and happenings that evening, the depths and repercussions are still being integrated to this day.  Needless to say I awoke the next morning as if I was new.  Everything sparkled with beauty and clarity, insights and understanding washed through me and I knew neither fear nor loss. I was not what I thought myself to be.

But it didn’t last.

A couple of months later the insidious sense of a separate I, the fear and sense of being insufficient and incomplete, slowly but surely returned with a vengeance.  I tried to hold on to the knowing, but the more I tried, the quicker it slipped through my fingers and I was once again left alone and afraid. A stale memory of a non-experience is exactly what it sounds like. The desperate search resumed.  Trying to get back what you think you’ve lost is infinitely worse than groping around in the dark for who knows what.  Luckily the universe is smart. What is, always is. And what isn´t, well… isn´t.

I moved around for a few years after that, glimpsing the sublime from time to time but always coming back to a story of a separate, suffering little me. I knew what I knew, but the experience of knowing needs to be fresh. Finally, and through some startling synchronicity I happened upon The Living Inquiries.  Immediately and instinctively, I knew this as a way to see through the opaqueness of the illusion of a separate self, along with all its woe and suffering.  A way that leads inevitably to the recognition of our inherent freedom, our shared true self.  I have been doing the Living Inquiries for several years now and have trained and been certified as a facilitator.  It is gentle and practical, uncovering and untangling beliefs we mistakenly think of as the limits of who we are.  The analytical mind is left aside as the wisdom of our bodies shows the way.  With openness and a desire for the truth of the matter, insights and understanding arise and feelings that were once resisted can be felt fully.  There is no authority or judgment here, just an offering of a welcoming space for all things to arise…and to fall away. What´s left is seen to be what was always here.

The experience I have shared above is not necessary to embrace the Living inquiries.  To tell you the truth I wouldn’t advise having it either! (a little joke).  Humor aside, whatever situation of suffering you find yourself in, be it anxiety and fear, guilt or shame, trauma and addiction, depression, anger, sadness, worry for the future or being stuck in the past (the list here is endless!), there is a way through them. A way to see that they were not what you thought they were.  That you are not (only) what you believe yourself to be.

If this resonates with you, send me a message, take my hand and let’s walk together awhile.

“Having a session with Luke is like slipping through a portal into a space where the pull of the ego isn’t so strong. His quiet facilitation style is amazingly powerful, and enabled me to see the belief that was causing all the angst so clearly; and in the seeing it simply fell away. I am very thankful that I got the opportunity to work with Luke.” Jo H